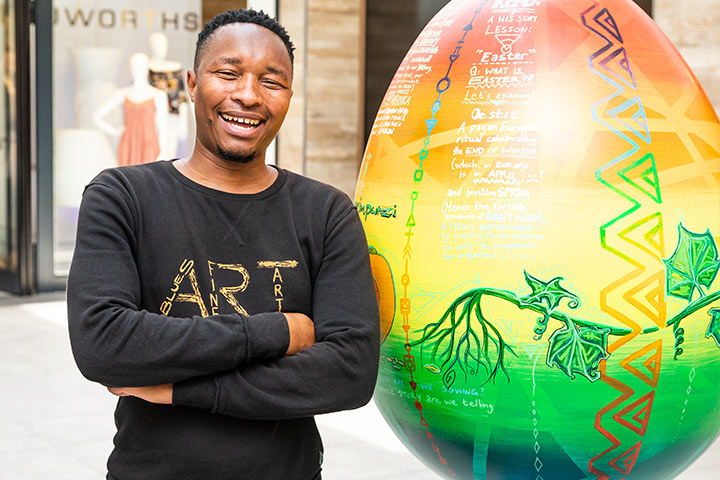 The 2019 painted egg by Tate Teasdale in tones of green and orange, challenged the viewer to unpack and order the relevance of celebrating Easter in Africa, she also gave some clues for further enquiry towards the pagan fertility that remain in the celebration of our Easter Weekend in the text of the piece.

What came to Blues Solombelo’s mind, as Easter approached, was the poor water supply to rural communities, for people, animals and watering of crops. During Easter many city dwellers may traditionally travel to their rural homes and the contrast in lifestyle from cities to rural seems to be among others, centred around access to water. Blues set about designing a nest piece that continued the conversation initiated on the egg, but instead of engaging with the provocative path prepared, he instead added a more vital issue than the celebration of Easter, the daily access to water.

To produce this piece Blues made a mould of a broken tap, slip cast and fired the taps and mounted them onto cardboard fabric inner tubes, to suggest water pipes, which are painted a range of blues. The names of rural villages and towns; sourced from friends; known to have water challenges, have been hand painted in white on the blue forms. The 2019 Egg with all its questions doubles as a large water reservoir while the taps remain inaccessible. The pattern on the base is made using pumpkin seeds as a stencil and blue spray paint and read as water droplets and seeds of thought.